Department of Education Secretary Leonor Briones called out teacher organizations which put the blame on the government agency for the billions of unpaid loans.

Briones addressed concerns that teachers will have none left of their bonuses since it will end up as payment for existing loans. She said it all goes down to how the teachers manage their debts.

“Why are they blaming DepEd? But who benefitted? Who borrowed?” the secretary said in a recent press conference.

The Secretary denied allegations claiming that DepEd has earned from the loans that teachers got from private lending institutions (PLIs). She noted that the service fee charged to them goes directly to DepEd Provident Fund.
She added that money from the said fund goes back to the teachers, with DepEd not benefitting even a single centavo from it.

DepEd already expressed alarm over the rapidly increasing amount of teachers’ loans which reached Php178 billion from PLIs and Php123 billion from the Government Service Insurance System as of last year.

Meanwhile, the Alliance of Concerned Teachers (ACT) Philippines said in a statement that the Education Secretary has declared ‘war’ against ‘lowly paid education personnel’ after allowing deduction from teachers’ and employees’ Net Take Home Pay (NTHP).

According to ACT Philippines Chairman Benjamin Valbuena, “They should understand that teachers and other education personnel are already in a cycle of indebtedness because of low salaries that does not even meet the standard cost of living inside the country.”

In a separate statement, the Teachers’ Dignity Coalition (TDC) also expressed criticism over Briones ‘blaming’ teachers on their low take home pay after loan deductions from their salaries.

TDC recognizes Briones’ proposal for a financial literacy program, but noted that “how could one manage finances if he has none?”

The said coalition that the best solution for this dilemma is to fully implement the welfare provisions of the Magna Carta for Public School Teachers, and provide overtime pay, free health services, study leave with pay, cost of living allowances, and higher salary grade among other benefits. 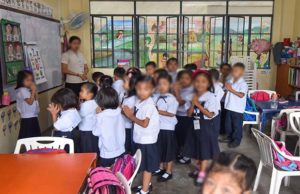 CHED
Some senators expressed their concern over students’ learning from the current modes of education resulting them to suggest resumption of face-to-face classes in some...
© Depedtambayan 2013-2018