The Department of Budget and Management (DBM) assured government personnel that they will be receiving their cash gifts and year-end bonus starting this month.

According to Budget Secretary Benjamin Diokno, the government allocated Php6.93 billion for cash gift and Php32.84 billion for year-end bonus for some 1.3 million government employees under the 2017 budget.

Diokno added that aside from the year-end bonus, each state worker will also get a Php 5,000 cash gift. He also clarified that since work has been suspended due to the 31st ASEAN Summit from November 13-15, employees can expect their bonuses on November 16.

READ: November 13-15 declared as holiday in some areas due to ASEAN Summit.

Under the guidelines issued by the DBM and Budget Circular No. 2016-4, government personnel eligible to receive the bonus and cash gifts are those who have rendered at least four month of service, including leave of absences with during the period of January 1 to October 31 and are still currently employed.

The following government employees are qualified for the cash incentives according to Budget Circular No. 2016-4. 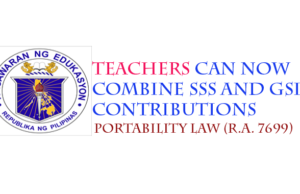 CHED
One of the frequently asked questions of teachers who transferred from private to public sector is what happens to their contributions from Social Security...
© Depedtambayan 2013-2018