Good news to start 2018! Today, the tax reform law which will impose withholding tax exemptions for employees earning up to Php 685 or Php 20,833 takes effect.

Unlike the previous table, the revised one shows that the government has standardized the withholding tax rates with exemptions to all employees regardless of dependents.

This memorandum was released after a joint agreement from both houses of Congress earlier this December to exempt from income tax payment annual earnings of up to Php250,000, aiming to increase the take home pay of workers. 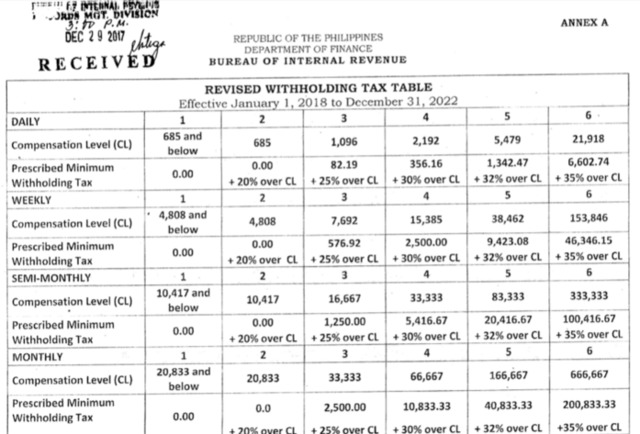 BIR Commissioner Caeser Dulay issued a memorandum circular directing all internal revenue officers to ensure that by January 1 “everyone making compensation payments to their respective employees shall deduct and withhold from such compensation a tax determined in accordance with the revised withholding tax table.”

“The committees are drafting the Implementing Rules and Regulations of the law. The members are also set to conduct internal and external briefings nationwide to make way for the hassle-free implementation of the law.”

The TRAIN Law contains the first package of the Comprehensive Tax Reform Program of the Department of Finance. The law is estimated to generate about Php82.3 billion in 2018, or about two-thirds of the P134 billion originally expected.

Forms
The Civil Service Commission (CSC) being the central resource institution is mandated to prescribe all forms for Civil Service examinations. The Personal Data Sheet that...
© Depedtambayan 2013-2018