Public school teachers are facing yet another burden aside from meager salary and pay cuts due to loan deductions. They are now being threatened they will lose their license to teach if they fail to pay their debts from Private Lending Institutions (PLIs).

Central Luzon teachers marched to the Professional Regulation Commission (PRC) to appeal that the agency ‘do not take the side’ of these lending institutions – particularly St. Bernadette Lending, among others- with regard to teachers’ loans that have accumulated due to high interest rates.

Alliance of Concerned Teachers (ACT) Region 3 Members alleged the PRC of taking the side of PLIs and ‘pressuring’ public school teachers who have unpaid loans to settle or risk losing their license to teach.

ACT Region 3 President Romly Clemente claimed that PRC officials have been summoning teachers who have availed themselves of loan from PLIs to a series of mediation. “Bakit ang PRC, isa-isang pinatatawag ang mga gurong may pagkakautang sa PLIs at kunwaring namamagitan (Why is the PRC calling teachers who have loans with PLIs one by one in an apparent effort to mediate)?” Clemente asked.

He said that the when teachers report to the PRC office, they are being pressured to settle their debts with the PLIs. “Ang katotohanan kapag nasa PRC na ay nandiyan na ang panggigipit sa guro at pinapangako na magbayad ng halagang hindi na kayang bayaran (The truth is when teachers get to PRC, they are pressured and forced to pay amounts that they cannot afford).”

Clemente stated that when teachers attend the mediation and being forced to settle their unpaid loans with corresponding interests, they are asked to sign documents and opening of checking accounts so they can issue blank checks.

He added that many teachers are even asked to surrender their ATM cards along with their personal identification numbers (PIN).

Aside from the alleged incidents, Clemente said that many teachers are also being ‘threatened’ by these lending companies with filing of cases before the PRC, their licenses may be held or revoked which will then make them lose their jobs.

Public school teachers reasoned out that many of them tend to over-borrow money from PLIs due to low salary. Thus, they are campaigning for wage hike that will increase their entry level salary of public school teachers to Php25,000 and Php16,000 to non-teaching personnel. 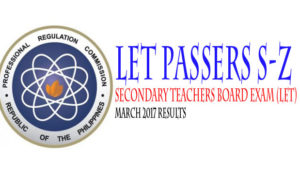 Board Exams
For those who took the March 2017 Licensure Exams for Teachers, or those who have friends or family members who did so, the results...
© Depedtambayan 2013-2018