November 13, 14, and 15 has been declared as special non-working days in Metro Manila, Bulacan and Pampanga according to a recent proclamation from Malacañang.

This announcement was in lieu with the activities of the Association of Southeast Asian Nations (ASEAN) Summit and Related Meetings.

According to Proclamation No. 332 signed by President Rodrigo Duterte, “The ASEAN 2017 National Organizing Council has recommended that 13-15 November 2017 be declared as special (non-working) days in the NCR and the provinces of Bulacan and Pampanga, as these areas will be directly affected by the said activities.” 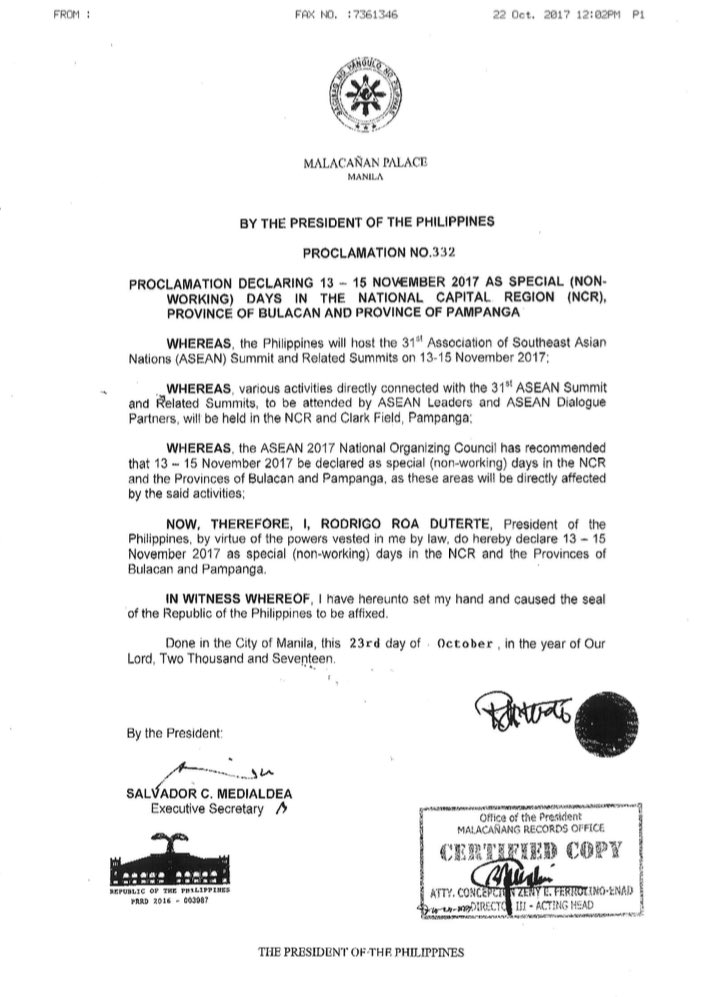 READ: SEMBREAK not cancelled even with recent class suspensions.

The Philippines is hosting this year’s 31st ASEAN Summit which will include various activities and meetings. It is scheduled to take place on November 10-14 in Clark, Pampanga and the Philippine International Convention Center (PICC) in Pasay City.

Top officials of Southeast Asia and its partner countries, including US President Donald Trump is expected to attend the summit. Because of this, security is being tightened up by both local enforcers and the ASEAN Security Task Force (ASTF).

Meanwhile, employees who will work on the said holidays and under the respective areas are paid at least 130% of the sum of their daily rate and cost of living allowances.

DepEd
After graduation, you are now ready to take in your role as a teacher in the real world. But with so many education graduates...
© Depedtambayan 2013-2018